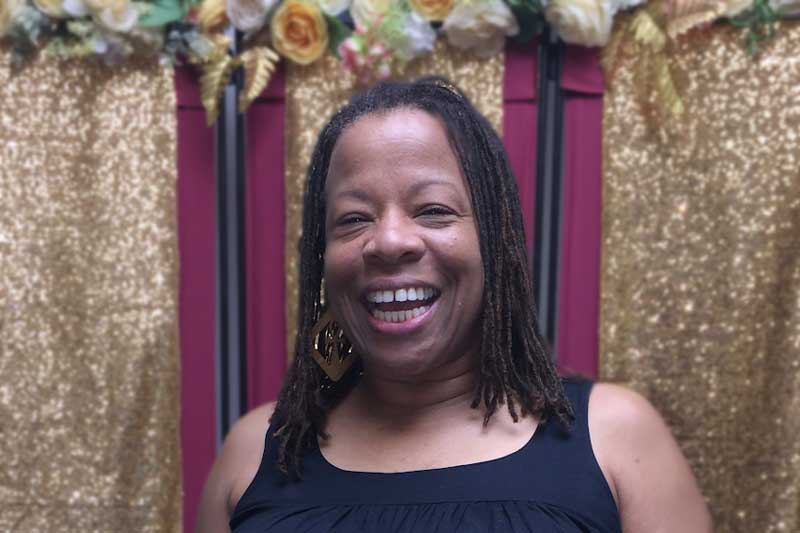 Born and raised in Cincinnati, Ohio, Vaune Blalock, ’20, has enjoyed a successful career with a variety of educational experiences, including studying at large universities as well as in New York City at the Alvin Ailey American Dance Center. She is a member of Phi Beta Kappa and has won awards for her costume designs and choreography.

On May 9, 2020, she added a Bachelor’s degree with a major in dance studies from Meredith College to her long list of accomplishments.

On her second visit to campus, Vaune said she stopped by to check on her financial aid and application. Knowing her intended major was dance, Tom Manning, Wings director, immediately set up a meeting with Carol Finley, department head and professor of dance.

“After meeting with Professor Finley in the dance department, it was a wrap,” said Vaune. “I told her that I have held every position in a nonprofit except executive director. She immediately looked up the qualifications for the position. She told me I would definitely need an undergraduate degree, and I decided my major would be dance studies.”

During that same visit to campus, Vaune sat on a bench near the front of Johnson Hall to consider whether she should attend Meredith. As she sat there, she noticed that everyone who passed by smiled and greeted her.

“I never thought of going to an all-female institution before in my life. But after attending two large universities, I thought I could definitely try a more intimate approach with smaller classes and a great student/teacher ratio,” she said.

Vaune loved the dance department and enjoyed opportunities to share her expertise. Early on, she was surprised to discover that so many of her professors were women. She soon identified a number of aspects of attending a women’s college that she appreciated such as finding greater comfort in her appearance and learning more about the socio-political status of women in the world

“Being a Black American, I have experienced the dominant culture from a race perspective. As a dancer, I have experienced prejudice and oppression as a woman, Black woman, a curvy woman, and a short woman,” said Vaune.”My professors brought out the lifelong prejudices for women in the areas of employment, politics,and the socio-economical avenues of life. It is unbelievable how far we’ve come and how far we still have to go!”

Vaune’s Meredith experience was not without its challenges. During her second year, she fell at work and tore her meniscus, which led to her losing her job. After taking a leave of absence, she approached Ann Gleason, dean of students, and Heidi LeCount, director of residence life, for help. With their support, Vaune became a Resident Assistant (R.A.) in one of the residence halls.

Living on campus allowed her, in turn, to support fellow students as an R.A., some of whom called her “Mama Vaune.” She was also able to participate in more activities and Meredith traditions, including some that she had missed previously, such as dance performances, the Honor Code ceremony, Ring Dinner, and more. She also served as president of F.I.R.E. (Fierce International Rhythmic Experience), a cultural dance organization, and gave admissions tours to visiting students.

Throughout her time at Meredith, Vaune learned about and built on her strengths, a practice she’ll continue after graduation, when she plans to either pursue a graduate degree or an arts administration position.

“What I have learned at Meredith is that all things are possible if you ask and are determined to make it happen,” said Vaune. “I took the first steps, but I had an army behind me pushing me forward and holding steady so that I could not go backward. Meredith embraced me – and I embraced my (now) alma mater.”