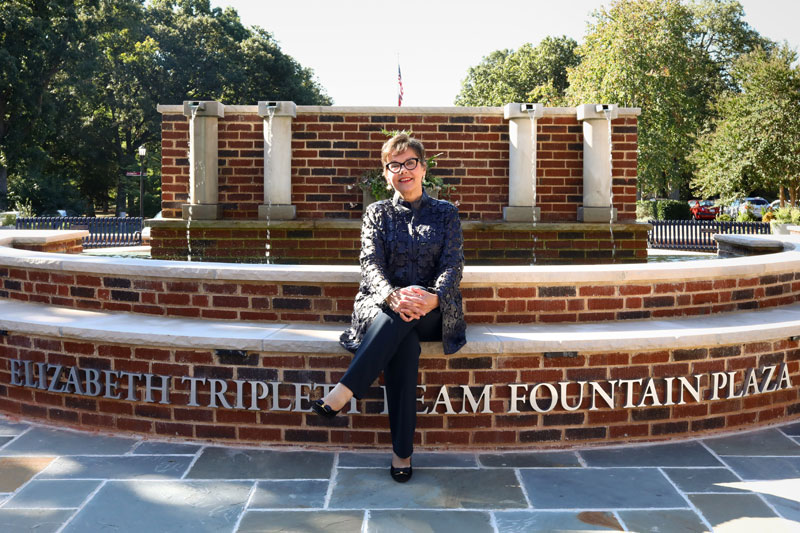 The Meredith College community gathered in front of Johnson Hall on October 2, 2017, to celebrate the dedication of the Elizabeth Triplett Beam Fountain Plaza.

A $1 million gift from Elizabeth Triplett Beam, ʼ72, of Raleigh, N.C., names the fountain plaza that was renovated last year. The gift supports Beyond Strong │The Campaign for Meredith.

“A dedication is a special time to commemorate the establishment of something new and wonderful. This fountain plaza—including the fountain, sitting areas, and the accessible walkways into Johnson Hall offers a rather extraordinary message of welcome to all who arrive at Meredith College,” said President Jo Allen, ʼ80.

The fountain in front of Johnson Hall has long been a place of memories for Meredith students. Beam was pleased to have family and friends attend and celebrate a place that means so much to her.

“It is a gracious and lovely place of welcome and comfort and the idea that it can be meaningful to new students and alumnae is very satisfying,” says Beam. “My husband, David, and I met on a blind date in 1969 on the breezeway of Vann. After 45 years of marriage, we still see the front of campus as the location of the beginning of our family legacy. We love the idea that our children and grandchildren can come to a place that we love and is part of our family history.”

Beam says she has continued to stay involved on campus because she wants to give back to the institution that has shaped and enrich her life.

“Each of us has a role and responsibility in keeping Meredith vital, relevant, and strong,” says Beam. “Meredith College has meant all the world to us.”

Beam, who earned a degree in music education in 1972, attended Meredith because of the reputation of the music department and the location of the College. During her time at Meredith, she enjoyed leadership opportunities, life-long friends, and excellent professional preparation, as well as a broad education in liberal arts that she says has served her well.

In her 35-year career, Beam conducted school and church choirs. In addition, she taught studio voice lessons and has been the director of the Cardinal Singers for more than 30 years. She holds music degrees from Meredith and the University of North Carolina at Greensboro. Beam currently serves on the Board of Trustees and the Beyond Strong Campaign Steering Committee. She has served as chair of the Board of Trustees, president of the Alumnae Association, chair of the Meredith Legacy Committee, and chair of the Presidential Search Committee. She has received the Outstanding Alumnae Award and the Outstanding Alumnae Philanthropist Award.