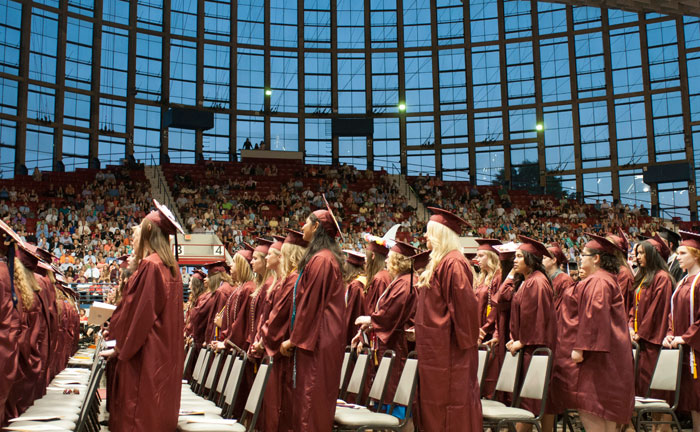 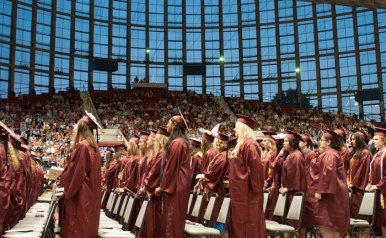 It is a tradition at Meredith for the senior class to select the speaker for their commencement.

This year’s speaker has special meaning to the class and to the College. The Class of 2015 has asked President Jo Allen, ’80, to give their commencement address.

Allen, the first alumna to serve as Meredith’s president, began her tenure as president in July 2011, just before the Class of 2015 moved in as freshmen. This special relationship with the class prompted their officers to extend the invitation to her.

“We asked Dr. Allen to be our commencement speaker because of her unique relationship with our class,” said Senior Class President Alexis Trell. “Her first year as president was our freshman year, so we have grown with her over the last four years at Meredith. She spoke at Fire and Water at the end of our freshman year, and it seemed fitting to ask her to speak again at our commencement.”

President Allen was honored by the Class of 2015’s request.

“I could not be more thrilled or humbled by their request.  I am so pleased that they see us as being on this important journey through four years together—and I couldn’t agree more,” Allen said. “I am sure I have grown and learned and appreciated the opportunities that Meredith offers every bit as much as they have and do.”

Trell and her classmates admire Allen as a leader, and appreciate her status as a Meredith alumna.

“She has done amazing things for Meredith and has worked to ensure that the College will continue to go strong into the future,” Trell said. “It is truly special to have an alumna as the president of our college. She understands the value of Meredith’s traditions and the sisterhood that comes along with it.”

President Allen said she has learned from the Class of 2015.

“As we have grown together, they helped me learn what the Meredith woman of 2015 really is—how strong, smart, savvy, and connected she is,” Allen said. “And I am so impressed with the caliber of our students’ character. I see deep moral and intellectual prowess in understanding the most complicated and challenging issues of our times. They inspire me in every possible way.”

“During this time of transition [for graduates], it is inspiring to know that she has been in the exact same position as us and has gone on to achieve incredible success for herself and for Meredith,” said Trell.

Meredith College will hold its 2015 commencement on Saturday, May 9, at 7 p.m. in Dorton Arena. The ceremony will be livestreamed at youtube.com/MeredithCollegeLive.