Dr. Jack Huber, affectionately known as “Doc,” is retiring after serving as a professor of psychology at Meredith for over 35 years.  In addition to being an outstanding professor, he has also been instrumental in a number of other roles at Meredith, including serving as head of the psychology department (from 1974-2005) and advisor to the National Honor Society in Psychology, the honoree of an endowment to fund a Program for Children with Autism, the first-ever Meredith softball coach, and last but not certainly not least, he is known for his role of the “Rabbit” in Alice in Wonderland.

Upon the announcement of his retirement, a group of former softball team members decided to celebrate his years at Meredith by holding a softball game during Alumnae Reunion Weekend.  Around 14 alumnae, former coaches, friends and family came out to play with an additional half dozen fans cheering for their respective players.  The game lasted about an hour and was followed by a ceremony to thank Doc for his contributions to softball, the psychology department and to Meredith.  Softball coach Kim Scavone did an amazing  job organizing the field, equipment, decorations, and refreshments (including a huge cake with Dr. Huber’s picture on the icing).  Doc was presented with a custom made T-shirt and a memorable scrapbook which was full of pictures and notes from students thanking him for all that he has done for Meredith and her students.  Two members of the first Meredith College softball team played alongside with Doc’s wife, Polly, their daughter Beth, and even one of their young granddaughters!  It was a terrific celebration and a fine tribute to a very important and beloved professor and coach.  After the afternoon’s events, Dr. Huber said, “I was overwhelmed and overjoyed.  The 37 years have been a true blessing.”

If anyone would like to add any notes to be included in the scrapbook, please send them to Coach Scavone at scavonek@meredith.edu. 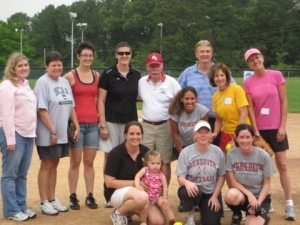